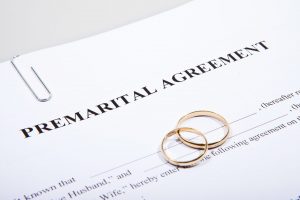 Most people consider Prenuptial Agreements to be reserved for the wealthy.  Oftentimes, they are viewed as a “relationship killer,” where at least one spouse goes into the marriage assuming that it will not work out.  While either scenario could be accurate, there are many reasons why parties might contemplate a Prenuptial Agreement, even when they have limited wealth and/or little doubt that the relationship will “go the distance.”  As any divorce attorney will tell you, when the Court is involved in dissolving a marriage, the assets being distributed are treated as if they were earned by both spouses for the most part, irrespective of which party holds the asset.  This concept was succinctly described by our Supreme Court in the matter of Carr v. Carr, 120 N.J. 336 (1990), where the Court said, “statutory equitable distribution is based on the philosophy that marriage is a joint enterprise in which the interest in and entitlement to its underlying property is also joint and mutual. The entitlement to marital property is not dependent on economic contributions as such. Less tangible efforts are recognized as equally valuable to the overall prosperity of the familial entity.” Id. at 346-347.

While subject to various exceptions and other considerations, this “marital enterprise theory” to some degree attempts to treat the marriage as a business.  Thus, the assets and liabilities accumulated during the marriage are considered to be part of that “marital enterprise,” with the partners/shareholders/members of the business entity being the spouses.

This enterprise theory of marriage is the underlying explanation as to why the non-financial contributions to the marriage are often, but not always, viewed as equal to the financial contributions of the monied spouse.  These joint efforts, financial and non-financial, combine during the marriage to allow the marital unit to function properly and to accumulate the assets available at the time of the divorce.

In a new business venture, with one party providing the financing and the other party providing the labor or “sweat equity,” an operating agreement and other related documentation formalizing the business relationship would be appropriate and generally uneventful between the parties.  Such an agreement could accomplish many things, to include defining how either may purchase the other’s interest in the business, limitations as to whom each may sell their respective interests, and even metrics for valuing each party’s ownership interest for resale.

Like a marriage, the parties to a business enterprise create an entity that is going to perform services or to sell a product; both parties enter into an operating agreement and own specific shares of the limited liability company or corporation.  Sometimes these shares are based upon capital contributions made at the time the entity is created and sometimes they are based upon what each believes they will be bringing to the enterprise.  As stated, those business agreements often indicate parameters under which either partner may buy or sell their interest in the company to third parties.  The very same concerns as to what might happen to a new business venture should be considered in the context of the marital enterprise.  Each is starting on a happy, blissful and optimistic note, with the belief that with a lot of work, everything will be a success.  Just like a marriage, people do not start business entities with the intention of failing.  Thus, one should not view a Prenuptial Agreement as a “blemish” on the start of the marriage, but instead, simply a prudent course of conduct at the inception of a long relationship.

Consider two spouses coming into the marriage with items they received either by way of a premarital gift or inheritance from their respective family members.  As a general rule, that gift or inherited property would not be distributed in the event of a divorce.  However, if either party commingles those assets, they often are considered to have been a gift to the marriage, thereby losing the protection granted these assets, either in whole or in part. With a Prenuptial Agreement, these parties can isolate the values associated with these premarital/inherited/gifted assets so that the items can be freely used and/or commingled to the benefit of the marital enterprise, without fear of loss.  The buying power of the marriage can be increased and harnessed for the greater good of the economic relationship, which would be otherwise limited absent the Prenuptial Agreement.

For example, assume one party to the relationship comes into the marriage with a separate residence that is worth $500,000.  Further assume that the parties initially live in this home, but after they have children it is determined that the home is in a less desirable school district and they wish to move to a different school district.  The parties could find themselves in a situation where they have to make a determination as to whether to continue to protect this asset by taking the precautions necessary to ensure that it remains separate and exempt property.  Or they can choose to utilize it as a means to advance the marital enterprise to the benefit of all involved and perhaps limit the existing protections, if not destroying them entirely.  The best way to make sure the home remains separate and exempt property would be to leave it exactly as is, without relying upon its equity or selling it to obtain a new home in the desired school district.  Alternatively, if a Prenuptial Agreement had been properly drafted and entered into at the time the parties were initially married, much like an operating agreement, that asset could be used without concern of the existing exemption, because the Prenuptial Agreement could have properly exempted the value from that asset, even if used by the marital enterprise to upgrade the home.  This would avoid the loss a gift to the marriage would have for the exempt property, while still allowing the family the benefit from the home’s value.  In sum, the spouse who has the exempt asset is able to infuse the $500,000 into the marital enterprise and the parties can then move to the better school district which they might otherwise be unable to afford without that money.  Further, there are other items, such as alimony which can be resolved as part of a Prenuptial Agreement.

While a Prenuptial Agreement is not necessary for everyone, such an agreement should not be viewed as a relationship killer but instead as an opportunity for two adults to try to create a road map for a clean distribution in the event of a divorce, when each is actually in a position where they truly do wish to be fair to each other.    A thoughtful and well drafted Prenuptial Agreement would, like an operating agreement, provide the Court with a guide to resolve potential future marital disputes, without the fees and transactional costs associated with the emotions of divorce that can often dictate the directives of even the most business savvy of professional partners.